I have been interested in “New Media” for the past few years. I spent my time in college researching the future of personal interactions on the internet. This lead me to researching the dynamic of internet communities such as Reddit. I was interested in the way which new ideas were shared, developed, and eventually turned old. Now that I have been working at Conde Nast for over one year, I am interested in reflecting on the lessons I have taken away from the business model it depends on. I am hoping to leverage my experience to generate a solid community of readers who I can leverage for future projects.

My mom is awesome

I uploaded the final copy of my first iOS app to the Apple store today!

I put together a landing page for the app: http://publicart.io 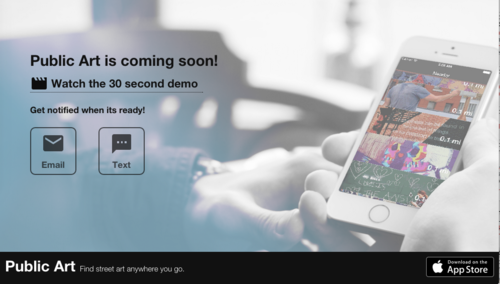 I’m pleased to announce that applications are now open for the next Orbital Boot Camp, starting in January 2015. Co-teaching with me will be Nikki Sylianteng. Edlyn Yuen and Chris Willard are also returning to advise and manage the program.

Orbital Boot Camp is a 12-week program to…

Marketing video for Public Art, the app that finds you street art. The video was made using Quicktime screen recording. I didnt know this feature existed until today. I edited the video in Photoshop. This was super ghetto, but works. I made sound effects using the app Patatap. The music is “Umbrella” by Lullatone.